In a backstage garden, Grzegorz Kwiatkowski carried around a large, overflowing plastic bag full of intense cold medicines. The lead singer of the Polish rock band Trupa Trupa had caught a cold from his 8-month-old son before the group’s gig at one of Poland’s most popular summer festivals.

“My doctor said you shouldn’t sing because if you sing very hard, your voice will be broken, and you will not speak for half a year,” Kwiatkowski said. “So, I just bought a lot of medicine and I ate it.”

Despite doctor’s orders, Kwiatkowski made it through his concert, belting out his signature post-punk, at times haunting, psychedelic songs in front of a large audience of eager fans. That pretty much encapsulates the do-it-yourself spirit of the group, and it always seems to get them through any unanticipated problems.

While Trupa Trupa’s four bandmates have been playing together for about a decade, they’ve recently emerged onto the world’s stage. Based in northern Poland along the Baltic Sea coast, Trupa Trupa has caught the attention of a U.S. audience – the band has played South by Southwest in Austin two years in a row and signed to American record labels.

This month, they’re heading to Southern California to play the Desert Daze festival at the Lake Perris State Recreation Area on Oct. 12, as well as shows at The Alibi in Palm Springs Oct. 11 and at Echoplex in Los Angeles Oct. 14. Trupa Trupa’s newest album “Of The Sun,” came out in September, and it received rave reviews in Pitchfork, NPR, and other outlets.

“It’s really an amazing situation, and we are lucky to have this kind of feedback in the United States,” Kwiatkowski says. “In 2015, when we had our first big review in the U.S., we were in a big shock. And the situation is getting better year after year.”

The fact the band sings in English makes it more relatable to American audiences. As kids, they grew up listening to music in English – groups such as The Beatles, Velvet Underground, Sonic Youth are their inspirations. Trupa Trupa’s lyrics are simple, open for interpretation, and often repeated for effect.

Kwiatkowski, a philosophy major who comes across more like a thinker and a poet rather than a punk rocker, is obsessed with existential philosophers like Friedrich Nietzsche. That’s apparent in his songs, which are dark and minimalistic, yet full of deeper meaning, like intense haikus. The band’s name Trupa Trupa literally translates to, “corpse,” and Kwiatkowski’s poetry often veers towards heavy topics like genocide and death, since he cannot escape the past.

Off stage, Kwiatkowski is a cheerful, jovial guy who writes excited emails laden with exclamation marks, smiley faces, and the word “Hooray.” His bright side reveals an optimism and sense of hope that’s mixed in with a somber remembrance of past despair.

The band hails from Gdansk, a Polish port city with a dramatic history. Devastated during Nazi German rule and the Holocaust, then under Communism, the city became a hotbed for worker strikes in the 1980’s, sparking the democratic Solidarity movement that eventually toppled Communism in Poland.

In recent years, Poland has seen a rise in right wing nationalism, like much of Europe. Then came the biggest shock: earlier this year, Gdansk’s progressive, liberal-minded mayor was fatally stabbed in public. “Mayor Paweł Adamowicz was murdered because of an atmosphere of hate speech, which was created by radical right-wing people,” Kwiatkowski says. “In some way, this situation woke up our band; we are now more conscious and stronger.”

At SXSW in Austin this past March, Kwiatkowski dedicated the band’s gigs to Adamowicz. “We are not a political band,” he says, “but we will always be against hate speech and evil. And, our music is very much about observing this dark side of human nature.”

The band does not shy away from the Holocaust either, with much of Kwiatkowski’s poetry touching on genocide. “Remember that Poland is the site of one of the biggest genocides in world history,” says Kwiatkowski. “We will never forget their pain and suffering.”

His grandfather and grandfather’s sister were imprisoned in Stutthof concentration camp near Gdansk. “I am the first generation who can speak about it aloud with my art, since I have a greater distance to this tragic period in history,” Kwiatkowski says. “It affects us and our families and our personalities, even if we don’t want it to. But our art gives us a relief.”

Though Kwiatkowski usually does the interviews, the band doesn’t have an official leader, but rather functions as a democratic quartet — Trupa Trupa’s music soaks in this mélange of opinions, voices, sounds, and personalities.

“Most of our songs are created by all of us at rehearsals. And every member has an impact on everything,” Kwiatkowski says. “That’s why our music has different layers. Even within one song, you can find a few different songs. On one album, you can find very different stuff.”

So, what does Kwiatkowski think of all this attention? He’s super excited, but taking it all in stride: “if we will really believe we are successful, it will be the end of the band,” he says.

The Southern California News Group of 11 newspapers across the Los Angeles area: 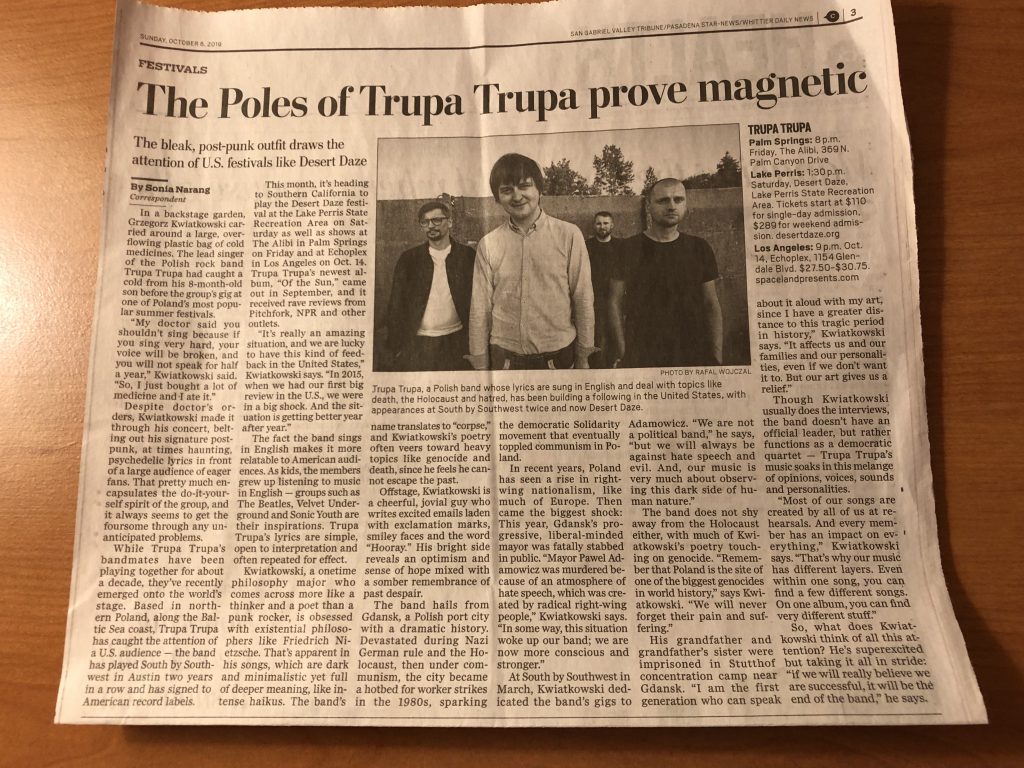