The Polish rock band Trupa Trupa, which recently toured the UK and will return in January, are unlike other acts in their readiness to directly tackle perhaps the most troublingly complex element of their country’s history: the Holocaust. END_OF_DOCUMENT_TOKEN_TO_BE_REPLACED 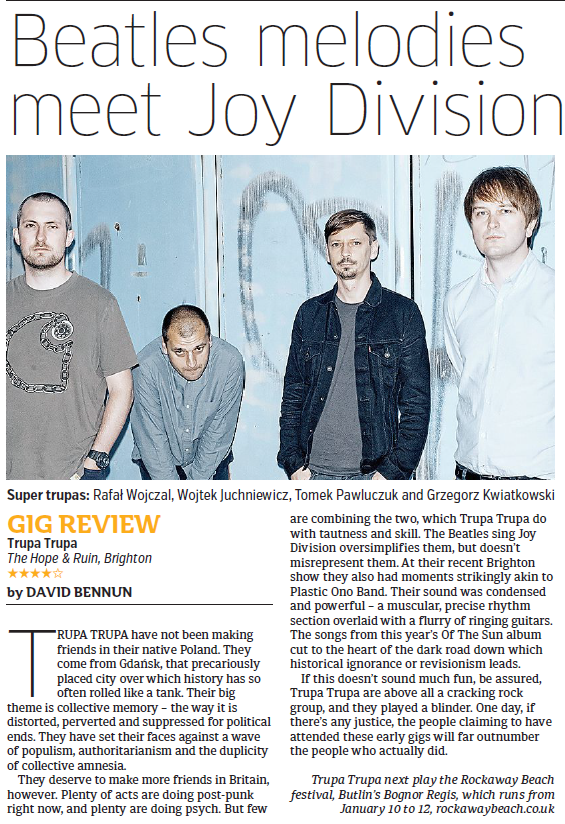 „The Gdansk quartet rail against rightwing hate speech – and have uncovered a dark secret about their country in the Nazi era.

Grzegorz Kwiatkowski, the singer, guitarist and co-songwriter of Polish post-punks Trupa Trupa, is thinking of home. “At first, we said that our environment had nothing to do with our music, but we were wrong,” he says of Gdańsk, the Baltic city the band hail from – and the site of the second world war’s first battle. “The city has a tragic history.” END_OF_DOCUMENT_TOKEN_TO_BE_REPLACED

Of The Sun – prasa

Channeling a wary mixture of dread and hope, the Polish indie rockers tighten the slackness of previous records into a potent fusion of post-hardcore and shoegaze.[…] More than just revel in the tension between medium and message, Trupa Trupa are the rare dystopian post-punk band to embrace optimism and levity as necessary survival mechanisms.[…] Trupa Trupa may not have the perfect prescription for a better world, but they welcome you to imagine one together.

Songs that feel like dreams, charged with spasms of noise, gut-punch bass lines and hypnotic melodies.

With shades of Sonic Youth, Radiohead and the kind of rainy, overcoat-wearing bands that Manchester was so good at producing in the early Eighties, Trupa Trupa jump from hypnotic trawls (Satellite) to shouty angular stomps (Turn), while bringing some indefinable quality that can come only from their lives. As revitalising as it is odd, Of the Sun is one of those curios that is really quite exciting, through sheer character and energy alone. 4/5.

Will Hodgkinson, The Times

Off-kilter melodies, dense instrumentation and lyrical explorations of the darkest side of the human condition.

Just really dug them a lot. Trupa Trupa. A band that is at once very experimental but also deeply commited to the kind of noise that gets you out of your seat. You can get the sense that there is a lot of social protest, a lot of noise on behalf of the issues that matter. This is Trupa Trupa. The new album is called Of the Sun out in September. This is a track that really has a great sort of heavy metal Radiohead vibe about it and I really dig it. Keep an eye of that record.

Henry Rollins says our „Of The Sun” album is fantastic and we are featured in three of his KCRW shows!

Trupa Trupa Convert Historical Trauma into Post-Punk Catharsis on Of The Sun.

This gripping and energetic record packs a serious punch!

Torres, Lucy Dacus, Julien Baker and Trupa Trupa! Our song „Dream about” is featured in the new episode of NPR Music’s All Songs Considered – The Week’s Best New Songs! „They’re one of these bands that are super super loud and punky, but then, all of a sudden, it’s melodic” says Bob Boilen!

Trupa Trupa continue to hit the mark as they experiment with simplification without excising the art from their rock.

Of The Sun pośród najlepszych właśnie wydanych albumów wg radia NPR w cyklu New Music Friday! „The band Trupa Trupa has an album out now called Of The Sun. And it is a great one!” stwierdza Robin Hilton.

Trupa Trupa’s Of The Sun takes apparently simple songs and brutally smashes them up. A gripping slog with beautiful, luminous moments that stay with you long after you’ve stopped listening.

Of the Sun draws on wider strands of what could be broadly called “21st century post-rock”…The epic punch of Trupa Trupa’s songs feels like it has a grimmer edge, one that betrays a sense that things may not be as you want them to be. All too apt for the current times.

The Polish quartet reaches new hypnotic heights… As summer fades and the rains cometh, we recommend grabbing this moody delight and getting lost for a little while. It’s well worth the trip.

A band that unlock many things in their listeners. Their music is certainly adept at opening up a number of intriguing psychic contradictions, or emotional opposites.

Can’t wait for trupatrupaband’s new album, Of the Sun, due this September!

I am loving the music of Trupa Trupa out of Poland.

Recenzja Of The Sun – The Times

„With shades of Sonic Youth, Radiohead and the kind of rainy, overcoat-wearing bands that Manchester was so good at producing in the early Eighties, Trupa Trupa jump from hypnotic trawls (Satellite) to shouty angular stomps (Turn), while bringing some indefinable quality that can come only from their lives. As revitalising as it is odd, Of the Sun is one of those curios that is really quite exciting, through sheer character and energy alone.”

Will Hodgkinson, The Times

„They’re one of these bands that are super super loud and punky, but then, all of a sudden, it’s melodic”  – Bob Boilen.