’It would be brilliant if our music made the world better’. That’s what Polish avant-garde rocker GRZEGORZ KWIATKOWSKI hopes but, says Michal Boncza, he isn’t holding his breath.

TRUPA TRUPA, about to launch their new EP in this country, made waves in Britain last autumn with their remarkable album Of The Sun. Their laconic and pessimistic lyrics were inspired by the Sisyphean struggles of, among others, Miguel de Cervantes’s Don Quixote and the Irish protagonist of Werner Herzog’s film Fitzcarraldo. He was immortalised on celluloid by Klaus Kinski, born in Trupa Trupa’s home city of Gdansk. The band’s unusual collectivism and internal democracy is evident in the insistence of lead singer Gregorz Kwiatkowski — former busker on the streets of Liverpool and one of the band’s two lyricists — who will speak to me only in personal capacity. He explains that Trupa Trupa are all about exploring the dark side of human nature during times in which it seems that “we are being encouraged to take pride in our bloodthirsty instincts to vent anger and frustration,” when I ask why their songs are imbued with such pessimism. Poland, he believes, is facing the same problems as the EU, Britain or the US, with populism their obvious manifestation.

“Being from the city of Lech Walesa and Solidarnosc obliges me to say that,” he chuckles, pointing to “a mix of nihilism, lack of belief in any values and total egotism. Cynical economics and business have washed away empathy and humane responses, the consequences of which will be felt for many years yet.” The band’s music responds to that troubled reality as “a kind of spiritual homework but it is not for us to teach or lecture,” he says. “When touring we meet more and more people who share our values but I could not say if our music has any educational value as we do not factor that in.”

Naturally, all the band want a world free from anti-semitism, xenophobia, misogyny and homophobia “and it would be brilliant if our music made the world better but it isn’t for me to judge,” Kwiatkowski observes. He is clear that Poland’s transition to capitalism has led to alienation and egotism. “We fear even more and accept others even less,” he stresses. “It’s a kind of a moral desert that has wreaked havoc with our spirituality.” The only answer is to work hard at doing what is morally, ethically and aesthetically right despite the unpleasant atmosphere in the country. He has been Amnesty International’s co-ordinator for Gdansk and fellow band member Rafal Wojczal is in Greenpeace. They value their collaboration with two ethical and anticolonialist labels Glitterbeat Records in Europe and Lovitt Records in the US.

Kwiatkowski believes that in music it’s the path itself that matters most, not financial gain or popularity and he takes an endearingly old-fashioned view of an artist being obsessively dedicated to his visions, citing William Blake as an example. Without aesthetics, “art is just stale advertising” and he’s inspired by songs that can kickstart a debate. He cites John Lennon’s Imagine as the best example of a manifesto conjured up from dreamy images where the music and lyrics are a vehicle for a philosophical message.

The band draw a catholic musical inspiration from the likes of Fugazi, Sonic Youth, Glenn Gould, Minor Threat or Elliot Smith but also Philip Glass and Franz Schubert. But Velvet Underground and The Beatles are favourites.

Kwiatkowski’s own poetry, separate from the band’s lyrics, has won him numerous literary prizes in Poland, where he has published seven volumes of poetry. His verse has appeared in Poetry Wales and the bilingual volume Should Not Have Been Born, published by Off_Press in this country. Currently, his poetry addresses issues of genocide, unsurprising since his grandparents were held at the Stutthof concentration camp outside Gdansk where 65,000 were put to death. The experience has impacted on his father and now him and his writingb attempts tries to confront the human potential for mass murder in the context of apparent indifference globally. As for the future, Kwiatkowski believes that Trupa Trupa will continue on their quixotic path and, perhaps in the future, they’ll find a resolution to Quixote’s own quandary that “virtue is persecuted by the wicked more than it is loved by the good.” 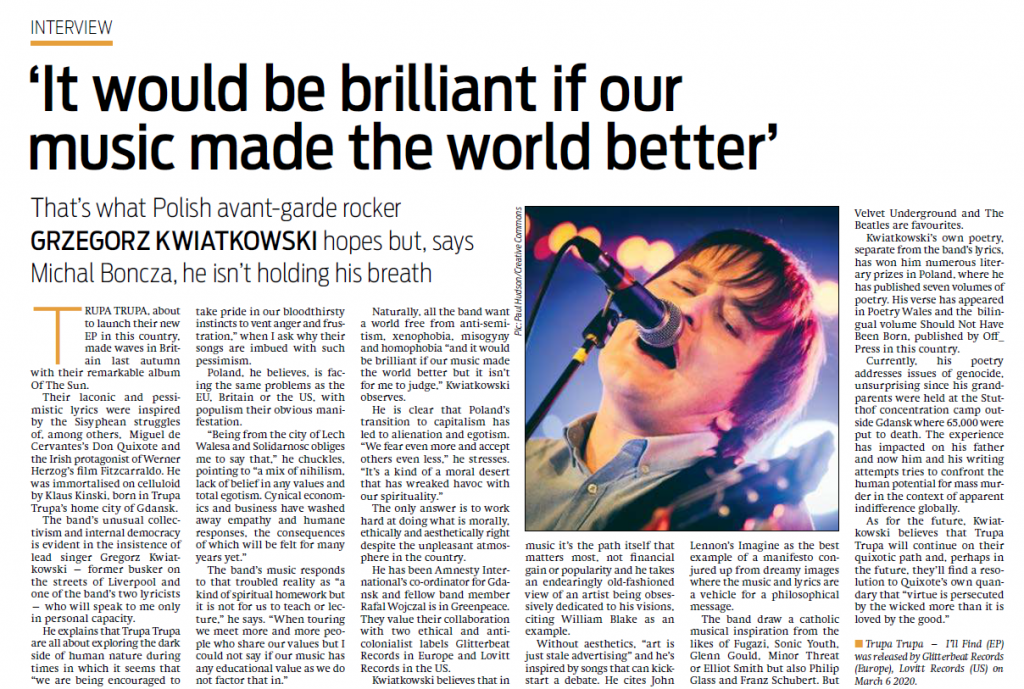